Broome and its stunning surrounds is home to a diverse array of landscapes, natural features and critters. Read all about some of them, below.

Birds are abundant in the region from the scavenging raptors to 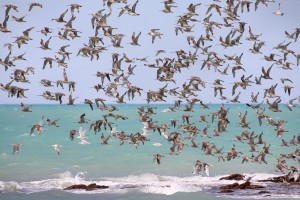 For somewhere to start in the West Kimberley visit the folk at the Broome Bird Observatory (near Broome) who know just about everything there is to know about birds, especially shorebirds.

Roebuck Bay, an embayment located at the base of the Dampier Peninsular, plays host to 100,000’s of migratory shorebirds who rest and feed here after flying extraordinary distances; some up to 8000km without landing. Combine the soft sediments, huge tides and shallow coastline and you have the perfect recipe for vast and bountiful intertidal mudflats. The mudflats are jam-packed with invertebrate species, which sustain many local and migratory bird species.

Whales, dolphins, turtles, dugongs, fish, islands, reefs… and on and on. If its within your means to get out amongst this raw and pristine beauty – do it! The Kimberley marine environment will leave you speechless. There is little else like it.
Plenty of charter boats, from comfy to absolute luxury can take you to places otherwise unseen by most terrestrial travellers. Up remote mangrove lined rivers, to dot in the ocean islands and to

reefs that some say are unparalleled else where in the world.

The Humpback Whale season is approximately between July and September. These majestic creatures can be seen from boat tours or occasionally even from the shoreline.

If you don’t mind a bit of mud, a walk (wear shoes) out on the mud flats at low tide is a surreal experience. Go slow, take your time, and every step you will see a new creature. Whether it’s a pink sea cucumber, a blue and orange nudibranch, a purple or green sea slug or one of the myriad of colourful sea anemones or feather stars. Crabs, molluscs, sea squirts, star fish, sea slugs, brittle stars, sea urchins and so much more await you.

During around about September to February, seagrass will often emerge to carpet much of the Bay in a stunning green. Although it will make the critters a little harder to see, stay happy in the knowledge that this seagrass is supporting two local threatened species, the Green Turtle and the Dugong. Both rely almost entirely on the species of seagrass found in the Bay to sustain them.

Despite being a bit smelly and a mosquito haven, mangroves are a valuable asset to any coastline. They help to protect our shoreline from the erosive impacts of violent storms and provide a fantastic habitat for many invertebrate organisms, birds, crabs, bats and fish. A number of fish species use the protection of the mangrove environment as a nursery, raising young and vulnerable fish in its protective and nutrient rich ecosystem. Saltwater crocodiles are also quite fond of resting in the shade of mangroves. So, before you venture in for a look, ask someone about the area first.

As all places, Broome has it’s fair share of interesting wildlife. There’s plenty to see, but only a few to be wary of. These include:

The salt and the fresh water crocodile both occur in the Kimberley Region. The salt- water crocodile is of greatest threat to humans, however, this is not to suggest that caution should not be taken with freshwater crocodiles also. As truly wild animals, they deserve our full respect and, most of all, distance.
During the wet season, saltwater crocodiles, although not prevalent in Broome, are seen in the local creeks and off the coast. Occasionally, one can even be found sunning itself on the white sands of Cable Beach. Further north crocodiles can be found in creeks, rivers and coastal waterways year – round.

Irrikanji jelly fish are most commonly found in the warm waters off Broome during the months of October to April. Although tiny, (less than 2cm across), irrikanji inflict a severe sting which requires immediate hospital treatment. Initially the sting will cause only minor discomfort. Following 20-40 minutes symptoms including, severe pain, vomiting and sweating will develop. The best initial course of action is to douse the sting area liberally with vinegar – rubbing it will worsen the intensity of the sting. The best prevention measure is to wear a full length ‘stinger body suit’ when in the water (available in Broome) or to avoid the water during these months.

Mosquitoes and midges are a part of life, but it is possible to plan around them to some degree. Midges in particular are much more prevalent during spring tides (when the moon is new or full). Wet season conditions also increase their numbers, particularly in still conditions. Long sleeves, or a dab of insect repellent will sort them out!

Wildlife in your windscreen

Whether driving around Broome or into more remote areas, all drivers should be aware of other ‘road users’. Wallabies, kangaroos, goannas, cattle, pheasant coucals, snakes and many other creatures also cross the roads that intersect their range. Drive with caution, especially at night, for your sake and the animals’.