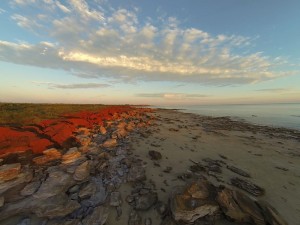 The climate of the Kimberley region is ruthless to the unprepared. So, be it a day trip in town or a week in the bush, be sure you know where you are going, ask people about what to expect and what you should take. Check the forecast!

More often than not in Broome, the sun shines brightly. Plan accordingly. Water, a hat, sunscreen and suitable clothing are a must. During the wet season the rain can be sudden and drenching.

Did you check the tide chart? Many a time has an unwary visitor (and yes, occasionally the unwary local!) found him or herself returning from a leisurely walk on the beach or a fishing outing only to find their beloved car submerged by the massive Kimberley tides. Kimberley tides, which are among the largest in the world, can exceed 10 metres. The speed at which the tides move should not be underestimated. A trip to the coast on a spring tide (at new or full moon, when the tides are at their highest and lowest) is worth it just to enjoy watching Mother Nature at work. Click here for the 2015 Broome Tide Chart

After months of warm weather and clear blue skies, clouds will begin to dot the skies from around about October. The humidity will begin to rise as will the night and daytime temperatures. This marks the beginning of the wet season. But don’t be fooled, the ‘build-up’ to the first rains, can take up to 3 months in Broome. Broome typically stays dry until late December which is when the monsoonal lows bring heavy rains and the occasional cyclone. Further north, the wait for rain isn’t as long – so if the ‘build-up’ is getting to you, a trip to further north may save your sanity!

Whilst the major roads in the region are all sealed, many others remain dirt or gravel. Conditions on dirt roads vary widely from well-formed graded roads to heavily corrugated, pot-holed tracks. It is always best to check with someone in the know before you head off. Throughout the Kimberley 4WD vehicles are frequently recommended for travelling on unsealed roads.

During the wet season authorities close many dirt roads for safety reasons and also to protect the road from being damaged. However, even roads that remain open should be treated with caution, as they are typically, slippery, boggy and infrequently travelled. Road Condition Reports are available from Main Roads by phoning (24 hours) 138 138 or via their online condition report.

Need we say it again: ‘be prepared’. The next fuel stop may be 300km away, only sell diesel and be closed until tomorrow. Ask first! And don’t forget that if you have 4WD engaged, your car will consume considerably more fuel than under normal driving conditions.

The natural environment of Broome and the Kimberely Region is under increasing pressure from bush fires. Although bush fires are historically common, in the recent past, the frequency and scale at which they occur and the time of year in which they occur (which is relative to the intensity of the fire) is of increasing concern. Much of the region’s flora and fauna are not adapted to cope with current bushfire trends. Fires can occur naturally due to lightening strikes, or may be lit to assist with stock management or indigenous hunting. Fires also occur accidentally as campfires get out of hand or as cigarette butts are carelessly discarded. Please take care. Only light a camp fire in designated areas and, even then, only when the fire hazard is low.