Though not renown for its surf, Broome’s beaches can be epic on their day. During the wet season an offshore cyclone will generate fantastic swell. The offshore wind and large (up to 3m) clean waves will motivate even the most lethargic of surfers. Cyclone surf can last from a few days to a few weeks, depending on the speed and direction at which the cyclone is moving.

The dry season months aren’t without their fun. From May to August classic surf is generated by winter storms in distant southern oceans. These days will have blue skies, perfect temperatures and clean waves up to 2 metres. If you have always wanted to this is the time to learn to surf.

The best location is Cable Beach just north of the Surf Club (south of the rocks), but if it gets too crowded (unlikely!) waves can also be found elsewhere along the 20 or so kilometres of Cable Beach. Cable Beach surf makes for interesting times as the massive 9 metre tides constantly change the banks. As conditions can change so rapidly, keep an eye on our web cam for current conditions.

Obey the surf rules and you’ll find Broome surfer’s very accepting, unlike other locations where localism is rife. Don’t forget, particularly during the months of October to April, to protect yourself from irukandji stingers. 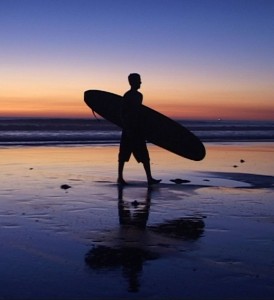