Go west, then a veer north; don’t stop now… keep heading north and stay close to the coast. Pass through the forests of the south-west, then the 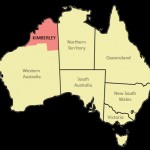 wide open agricultural expanses of the mid west. Warming up a bit? That’s right, you’re getting closer. Navigate your way through the golden spinifex plains and the dusty red ranges of the Pilbara, and voila, you’ve made it to the Kimberley Region: Australia’s far north-west. With an area of over 420, 000 square kilometres, you really couldn’t have missed it!

The region has a population in excess of 36,000, of which approximately 47% are of Aboriginal or Torres Strait Islander descent. With at least double the growth rate of other regional areas, the Kimberley region is the second fastest growing region in Western Australia. In Broome alone, between 1995 and 2005 there was a 55% increase in population.The Broome population is now (2011) estimated to be about 16,000.

Broome, the biggest town in the region, is a lengthy 2300km from Perth, the capital of Western Australia. Set amidst a largely flat topography 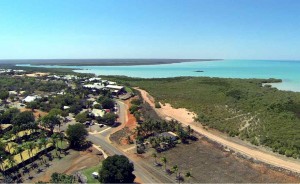 among Acacia and Eucalypt woodlands in the southeastern Kimberley, Broome’s isolation is, to many, a blessing. Far from the rigours and demands of city life, the pace is considerably slower. The iconic phrase ‘Broome time’ however, is as much embraced as it is cursed!

If isolation and a slower pace haven’t sold you, perhaps the endless kilometres of picture – perfect beaches and the sub-tropical weather will. Located north of the Tropic of Capricorn, Broome is blessed with endless dry summer months and a reasonably mild wet season; ideal conditions for enjoying a beach lifestyle. For many, the internationally recognised ‘Cable Beach’ defines Broome. For others however, Broome isn’t just about perfect beaches, but living among the rugged and relatively untamed wilderness of the Kimberley Region.

Just north of Broome, the Dampier Peninsular, with lovely beaches and great fishing, is a great weekend away. However, as with many locations in the region, it remains home to numerous indigenous communities. Entry into some locations is on a permit basis, for other areas entry is prohibited. Throughout the Kimberley region it is wise to check land owner-ship status before you travel.

The North Kimberley too, is a unique experience. Leaving behind the beaches, the plains and the pindan bushland around the southwestern lowlands, travels north reveal a much more rugged topography. Dramatic, ranges, gorges, plateaus dominate the scenery. Influenced by the more tropical climate and rugged topography, the vegetation of the north Kimberley is notably different from that of the southeast. Pockets of lush rainforest can still be found in rocky gorges, which are protected from destructive bushfires. Native animals are also more common in the north (largely associated with the higher rainfall). However, as elsewhere in the region, they are under threat from feral predators, weeds, bushfires and development.

Although much of the Kimberley relies on tourism to make a living, the region also earns its living from pastoral, agricultural/horticultural and mining enterprises. With 250, 000 hectares the average size of a pastoral lease in the Kimberley, management can be challenging at the best of times. Many of the region’s cattle (mostly Brahmin and short horn) are sold to the live export trade. The Northern Australian Land Manager website is a fantastic source of comprehensive land management information about the entire north, including the Kimberley region.

With mining and exploration in the region a massive growth area, it is difficult to predict the future of the Kimberley, as we know it today. High wages in tight times are attractive to many, and the consequences for many local businesses is staff shortages and decreased serviceability. An equitable balance between big industry and small business is keenly sought.