No matter the season in Broome there are plenty of fish to challenge even the most weathered of fishermen.

To maintain this abundance, please refer to the bag and size limits and additional fishing regulations stipulated by the Fisheries Department (WA). These regulations are designed to ensure that fish stocks will remain plentiful into the future.

From around May the dry season is taking hold and the easterlies are starting to blow. Threadfin Salmon are the go; not only are they a great

fighting fish, they taste bloomin’ marvellous. They can be caught on the incoming tide off Cable Beach and at the creek mouths on and after high tide. Try them on live bait or brightly coloured lures that are visible in the murky waters.

Before long the easterlies will well and truly establish and in the morning you’ll find it pretty rough going off shore. If you’re stuck on the beach, try for Queenfish or Trevally (cast slices or poppers). Alternatively you can try for Threadfin Salmon and Mangrove Jack in the creeks.

As the easterlies ease off in the afternoon try your luck at with a bit of reef fishing around Disaster Rock or Gantheume Point. If you’re after a plate fish, Blue Bone Groper, Northwest Snapper, Red Emperor and Spanish Flags will keep you happy. Edible wise, you might want to think twice about cobbler and catfish! Be warned, steer clear of the catfish’s spines on the back of the dorsel fin and at the base of the gills.

Offshore/pelagic species at this time of the year include, the very tasty, Spanish Mackerel and Long-tail Bluefin Tuna. Tuna are probably best spotted by keeping an eye on birds such as boobies and terns hovering in the skies above hoping to spot the small bait fish sought by the tuna. Boat up to the school and cast your lure in front. Mackrel will go for a floating bait such as a pilch. 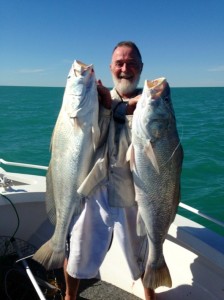 Roebuck Bay and in Dampier and Crab Creek.

For many, wet season fishing all about the elusive, fast moving and very jumpy Barramundi (Barra). Although Barra are around all year, in dry season when the waters are colder, they are much harder to find. Barra inhabit a variety of habitats, from creeks to estuaries to open waters, hence a variety of fishing techniques can be applied and for that matter, a variety of bait types.

Try for a Barra at Willie Creek or Barred Creek north of Broome on the Dampier Peninsular. A bit further out of town (on the way to Derby), the Fitzroy River is a popular Barra fishing spot. Langi Crossing, Snag Pool and Willams Pool on the Fitzroy River can be accessed through Yeeda Station. Keep in mind the pastoral lease protocol (see below) when travelling on pastoral leases.

There’s a good reason why 55cm is the minimum catch size and 80cm is the maximum catch size. Barra, which all begin life as male fish, take about 3 years to reach maturity (55cm). At around 5 or 6 years of age, the sex changes to female (yes, really!). At this time, the fish is approximately 80cm in length. So, to protect future fish stocks, all female Barramundi are protected. Those caught that are longer than 80cm, must be released. To ensure a successful release, do not hold the fish by the mouth or gills (this will kill them) and return them to the water as fast as possible.

If Barra aren’t your thing, try for a Giant Trevally at the end of the wet season, perhaps a Mangrove Jack or a bit of crabbing…

If a cyclone is slowing down your style, perhaps a few drinks and a fish tale or two will pass the time suitably…