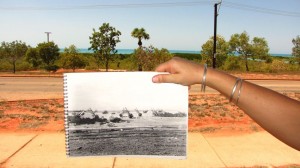 When Europeans arrived in the north-west and carved up the land for pastoral leases, the landscape, traditions and culture were never to be the same again.

But the cattle industry would never define Broome in the way that the pearl would. From an apparently lackluster shell, the simple beauty of a pearl grown within would spawn a vibrant and multicultural township, which was unique Australia wide.

The pearling industry caught hold in Western Australia’s Shark Bay in the 1850’s. In the late 1870’s government officials suggested that Roebuck Bay be set up as a pearling port. With this in mind, John Forrest selected a town site, which was eventually to be called Broome after the colony’s governor, Frederick N. Broome.

By the late 1880’s the pearling industry was establishing in Broome. Concurrent with this period, a new telegraph cable was established linking the colony to England, (hence the name ‘Cable Beach)’ providing essential communications to world markets. Propelled by the bravery of mostly Japanese, Chinese and Islander divers who risked their lives daily in search of the elusive pearl shell, Broome quickly became the biggest pearling centre in the world. By 1910, 400 pearl luggers worked the waters around Broome.

Divers would don vulcanized canvas suits, lead-weighted boots and the now iconic hard hats, and spend hours underwater in the murky local conditions. Shark attacks, storms and the bends (diver’s paralysis) were the ultimate price for many. The Japanese Cemetery in Broome is a memorial to over 900 of these divers who lost their lives in this risky and often ill-fated industry.

At around the time of the First World War the industry suffered a blow as pearl shell products (such as buttons) were replaced by newly developed plastics. By 1939 the industry was less than a quarter of its original size.

The Second World War brought yet more disruption to the industry. Japanese residents of Broome were either interned or went home, and what was left of the pearl lugger fleet was largely destroyed by a cunning and poorly defended bombing raid on Broome.

The pearling industry, as it originated, had ceased. However, the industry re-emerged in the 1950’s on the back of advancements in artificial pearl cultivation technology. Although cultured pearls remain the basis of the industry today, it is the characters, the cultures, the hardships and the triumphs of the early pearling industry, which are still celebrated today for forging the heart and soul of Broome.